Medical Research Scotland is Scotland’s largest independent medical research charity committed to encouraging and supporting promising individuals at the start of their research careers, through the award of doctoral studentships but also through support for undergraduates and scientists returning after a career break.

Our grants support research that aims to improve health in Scotland and globally in three ways: by improving the diagnosis, treatment or prevention of diseases; by understanding basic disease processes; and by the development of medical technologies.

Medical Research Scotland (MRS) developed from the Scottish Hospital Endowments Research Trust (SHERT) which itself had been founded under the Hospital Endowments (Scotland) Act 1953 (and re-enacted by the National Health Services (Scotland) Act 1978) to receive and hold endowments, donations and bequests and to make grants from these funds to promote medical research in Scotland. As a non-executive departmental body of the Government (at first the UK Government, then the Scottish) SHERT was responsible to ministers. But in 2003, Scottish Ministers consulted SHERT grant-holders, awarding institutions and other interested parties, seeking their views on its future status. The outcome was legislative change to create MRS as an independent agency with responsibility for managing its own affairs in accordance with the relevant charity legislation. The change was made through a Bill: the Smoking, Health & Social Care (Scotland) Bill which included provision for changing SHERT’s status. Approved by the Scottish Parliament, the legislation received Royal Assent in the summer of 2005.

The Members of the newly-independent charity agreed that changes were needed, including its operational name, though they also agreed that there would be no change to the rigour applied to consideration of funding applications.

Initially, MRS continued to award project grants as SHERT had done previously. However, this was changed under the Chairmanship of Professor David Harrison (currently John Reid Professor of Pathology at the University of St Andrews). MRS stopped giving project grants after 2011 and refocused the mission to support scientists at an early stage of their career by awarding PhD studentships instead. This spread resources better across Scottish Universities, delivering a broader and more dynamic portfolio of research. Significantly, it was also made a condition of award that there had to be an active industrial collaborator, ensuring that students gained industrial as well as academic experience, and raising the possibility of commercial impact from the research supported by MRS.

This new approach is reinforced by the support MRS gives to undergraduate students through Vacation Scholarships and outreach to secondary schools. As well as this, a relationship was agreed in 2014 with the Daphne Jackson Trust, whose mission is to support scientists resuming work after a career break. This multi-level approach to supporting scientists in the early stages of their careers – secondary school, undergraduate, postgraduate and returners to science – as well as the need to partner PhD students with industry, has been continued under Professor Harrison’s successor, Professor Philip Winn, from the University of Strathclyde.

How we set about our business is of course carefully regulated. As an independent charity, MRS is constituted in terms of Section 12 and Schedule 7 of the National Health Service (Scotland) Act 1978 (as amended) to receive and hold endowments, donations and bequests and to make grants from these funds to promote medical research in Scotland. It is required by the Health & Medicines Act 1988 to develop and exploit ideas and intellectual property. Funds are administered in terms of the Act by a body of Members (known as Trustees) who receive no fee or remuneration for their services. All those who have been appointed to serve as Members, or are otherwise associated with MRS (through the provision of specialist services, for example), have to agree to abide by a Code of Conduct based on the tenets of The Ethical Standards in Public Life etc. (Scotland) Act 2000. This Code is reviewed, and amended if required, at least annually to ensure that it continues to reflect good practice, meeting the requirements of OSCR, the Office of the Scottish Charity Regulator.

You can view more information about our trustees here.

After many years of supporting early-stage research careers, Medical Research Scotland has a number of highly successful alumni working at the forefront of medical science across the world.

As a member of our alumni network, you receive invitations to attend events including the Meet the Researcher Showcase and the Researcher Development programme, opportunities for networking with colleagues in academia and industry, and updates on new funding programmes offered by Medical Research Scotland.

Network members will also receive occasional updates on developments and opportunities to engage with Medical Research Scotland. We also hope to establish an ambassador programme to raise the profile of our members and the charity.

As a current or former student, membership is complimentary. We would like to invite you to join by registering your interest with mrsalumni@stripecommunications.com, where our team will be able to welcome you to the network and answer any questions you may have.

The Medical Research Scotland alumni community is here to support you. Join us today. 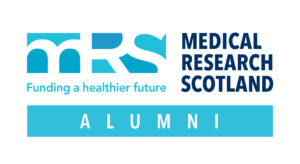